Miami Beach, FL – November 15, 2022 — The City of Miami Beach is pleased to announce the launch of Elevate Española, a dedicated art presentation site that will commission installations suspended above the historic Española Way corridor. Last year, art collective FriendsWithYou presented a hanging installation titled “Little Cloud Sky,” which consisted of eight inflatable cloud sculptures hanging above Española Way. The success of the installation led to further funding from the city to commission public artworks in the space, resulting in the naming of Elevate Española as a dedicated art installation site. Featuring two projects annually, Elevate Española will play an important role in bringing contemporary art to one of the most publicly visible areas of Miami Beach.

For its inaugural installation, Miami Beach resident and Haitian-born artist Edouard Duval-Carrié will debut an installation called “Trapeze Contortionists.” The work — which will incorporate the silhouettes of 15 figures of dancers, cut from lightweight aluminum — will be unveiled on Monday, Nov. 28 at 1 p.m., coinciding with the kick-off of Art Week Miami Beach. The project is generously funded by the Art in Public Places program of the City of Miami Beach.

Edouard Duval-Carrié’s work is reflective of his Haitian roots and his background as a historian of the African Diaspora. Especially unique to the South Beach area, Española Way evokes the walkable old European streets Duval-Carrié encountered when he lived in Paris. Specifically, this work for the inaugural Elevate Española installation took inspiration from a Senegalese contortionist troupe Duval-Carrié saw walk the highwire in a circus-like theater. Fifteen aluminum figures will hang above Española Way, the heavily trafficked pedestrian street between Washington and Collins Avenue, each grouped in their own colorway. Cut using a water-powered jet, the perforated sheets allow wind to pass through the multicolored figures in their various poses. The aluminum figures also evoke the more traditional paper or cloth flags and decorations often seen hanging in similar environs. The adjacent walls of Española Way will also be painted to resemble the fabric of circus tent walls, adorning the street with the aerialists of Duval-Carrié’s memory.

Born in Port-au-Prince, Haiti, Edouard Duval-Carrié fled François Duvalier’s regime with his family to reside in Puerto Rico, New York, Montreal and Paris before settling in Miami Beach. Duval-Carrié studied at the Université de Montréal and McGill University in Canada before graduating with a Bachelor of Arts from Loyola College, Montréal in 1978. He later attended the École Nationale Supérieure des Beaux-Arts in Paris from 1988 to 1989. He resided in France for many years and currently lives in Miami Beach. “I didn’t want to go back to Haiti because of the political turmoil there. I have two kids,” he explains. Instead he resides among Miami’s substantial Haitian immigrant population and maintains cultural ties to his homeland. His works have been exhibited in Europe and the Americas. 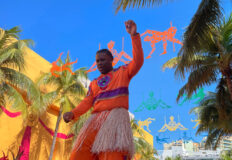 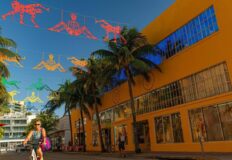